The Legend of Fritz Johnson ...

This is the story of one of the more colorful characters in the history of Omaha, and a mystery which will never be solved.

I was first introduced to Fritz by the following joke:

I was then told the Reader's Digest version of the story, and over the years it seemed like I would cross paths with the people and the settings of this still-unsolved mystery.

The Archer and fisherman: 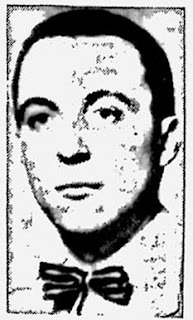 Larry rented a motorboat in Rocky River, a Cleveland suburb, and despite warnings from the boat house owner and the Coast Guard regarding an impending violent storm, set out on the Lake. Larry was an avid outdoorsman, a strong swimmer, and an Akron-area archery competitor holding state-wide titles. (Hold that thought!) 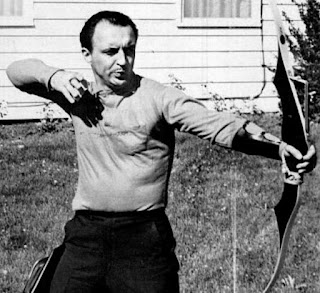 The storm happened as predicted, and Larry's fate, or so it seemed, was obvious.

The motorboat, or the remains of such, anyway, washed up on the Lake Erie shore the following day. Larry Bader was not to be found.

Coast Guard officers confirmed that survival in Lake Erie was unlikely during such a storm and the case was ruled a death by drowning. Larry's body was never recovered. Larry left behind a wife, three children, and a fourth on the way.

There was no evidence of foul play and Bader was subsequently pronounced legally dead.

A few days after the Ohio boating incident, 30 year old Francis ("Fritz") Johnson washed up on the shores of the Great Grey-Green Greasy Missouri River in Omaha.

Fritz quickly became a very popular Man About Town, landing a job as a bartender at Ross' Steakhouse on the then-burgeoning 72nd. Street Strip. Fritz drove a tricked-out hearse as his personal vehicle and became known as a jokester and all-around good guy.

Fritz parlayed his personality into a position as deejay and announcer at radio station KBON (1490, currently KOMJ) in early 1959. 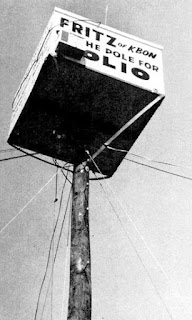 Fritz's claim to fame in 1959 was that of a modern-day stylite, spending two weeks (some reports say a full month) in a box on top of a pole on the Douglas County Court House lawn in promotion of the 1959 Polio Drive. Fritz lived, ate, and slept in the box, doing broadcasts and check-ins from time to time. A mini-scandal erupted when it was reported that Fritz's bartender friends were sending him cocktails via rope and basket.

In 1962, Fritz landed a position as news/sports announcer at television station KETV, channel 7. He gained considerable local and regional notoriety later that year when he was tapped by wrestling promoter Joe Dusek to host the weekly All Star Wrestling program, produced in the KETV studios. 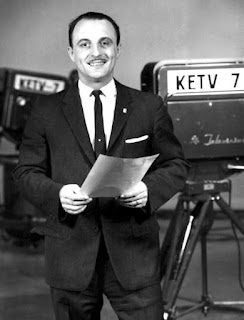 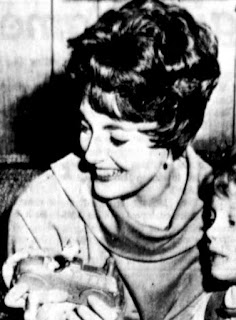 During his television career, he resumed his interest in the sport of archery, eventually capturing the Nebraska State Archery title. (You may now release that thought.) :)

Unfortunately for Fritz, his health took a turn for the worse, having been diagnosed with a malignant tumor which ended up costing him his eye. He appeared to recover quite well, resuming his television career and his life as an archer.

The lives of Larry Bader and Fritz Johnson collided when Fritz, while working on a side job promoting archery equipment, gave some archery demonstrations at a sporting goods trade show in Chicago in early 1965.

A friend of the family immediately recognized Fritz and phoned a Chicago area member of the Bader family. A niece rushed to the sports show, confirmed the likeness, and summoned two of Larry Bader's brothers from Akron. The family members confronted Fritz, who was cooperative but denied any connection to the Bader family. 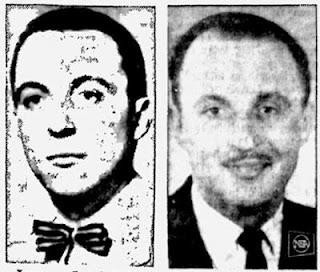 Fritz related his life story as having been born in the Boston area, spending most of his early life in a Brookline orphanage, and joining the US Navy right after high school.

The Bader family was not convinced, and Fritz willingly agreed to be fingerprinted and to have his prints compared with known prints of Larry Bader.

The investigation revealed, as the Bader family had suspected, that Fritz Johnson of Omaha was indeed the missing Larry Bader of Akron.

The subject of the story (LOL, I'm torn between calling him Larry and calling him Fritz at this point) emphatically denied knowing anything of a previous life as Larry Bader of Akron. He was examined by physicians, psychologists, psychiatrists, and, of course, lawyers.

No definite conclusion was ever reached.

Although his denial was absolute, he acknowledged his fiscal and moral responsibilities to both families.

Fritz was eventually fired by KETV. His Omaha wife had the marriage annulled. His Akron wife, who was then engaged to be married, sought a very awkward reunion but did not express any desire to resume the previous marriage.

Due to technicalities, charges for bigamy and fraud were dropped. The only successful recovery was a small civil suit for damages by the owners of the wrecked motorboat.

The cancer returned, affecting both the brain and liver, and Larry/Fritz passed away in 1966.

Such is the story of one of Omaha's, and of life's great mysteries.

We will never know!